The American is a quiet drama about a gunsmith who sells his services to spies and covert operatives. It stars George Clooney as a basically nameless man at the end of a long career, at a loss for what he cares for most.

This is not an action movie. Clooney is not youthfully overpowering and vengeful like Jason Bourne. He has a quiet calculation and cool that clearly comes from decades of experience. He talks muzzle velocity and magazine capacity like others talk about the weather. He doesn’t question his associate’s request to fire rounds just over her shoulder from long range because it’s most likely not an unusual request.

This is about the fictionalized unseen side of espionage, then. That man that handed James Bond a manila envelope just before he got in a taxi and sped away? That man was in India too, staying in a nondescript room, avoiding locals and biding his time until he was needed for his mission. What’s his day-to-day? Does he frequent coffee shops or whore houses? How does he like his tea? It’s an interesting take on the genre that doesn’t get much exposure.

Clooney’s gunsmith is an empty man. At this point in his life, though long and colorful, he has nothing to care about, nothing of value he’s brought from place to place. So he’s grasping for some modicum of want and companionship. 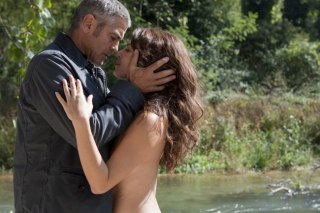 He eventually develops feelings for a tragically stuck prostitute named Clara. Playing the whore with a heart of gold, that she would spark some type of passion in his life fits. The gunsmith doesn’t need a woman to love full-time. The hole in his heart searches for any out-of-the-ordinary kindness, which is why why he grows fond for a woman who is merely honest and forward with him. He mingles with the town’s priest against the warning of his employer for the same reason. The lone wolf nearing the end of his life begins to realize that he’s lonely.

The American is a beautifully shot study about how even inconsequential men need some semblance of meaning in their life. Clooney’s cold-blooded craftsman needed to know that his panicked, grizzly death would amount to something more than a newspaper footnote. If he could flicker hope in the heart of his and another’s soul then his meaningless life wouldn’t have been for naught.