Daniel Craig’s James Bond series came out with a bang and presented a thesis of re-imagining that it has since fallen from. Casino Royale was a statement against camp and illogic. Skyfall painted Bond as a complex hero facing extinction in a world that’s moved on from Cold War-era operatives. But Spectre has taken a giant step back. It’s familiar, formulaic, and completely in-line with Bonds of the past.

Oddly, Skyfall faced some criticism for feeling too much like a departure from the edgy tone set by its predecessor, Casino Royale. Some said it felt too “Bondy,” too ready to embrace the usual franchise tropes Casino Royale sought to distance itself from. Bond drives a DB-5; old friends Q and Moneypenny are back; he fires a Walther PPK, etc. I always disagreed. And I would point those critics to Spectre as the true example of that tonal failure.

It’s Bond to the core in fact. And that’s a problem. Where Skyfall told an engrossing story and called back to old tropes with a wink and nod, Spectre used those very elements as major plot points and they just don’t work anymore.

Take the interrogation scene. The setup is classic and silly. Bond is strapped to a medical chair in a white room. Blofeld is at a computer terminal and at the click of a button, inflicts comedic-looking pain on his captor. The girl sits nearby doing nothing, except weeping. It’s neither scary nor relatable. It’s not even creative. The whole time I was thinking about the scene in Hitchhiker’s Guide to the Galaxy where they do the exact same thing to Arthur Dent. 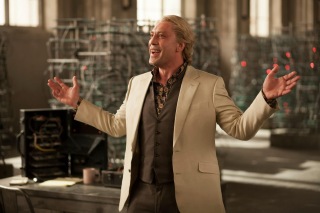 Contrast this with the same scene in Skyfall. In essence it’s just a monologue. Villain Silva (Javier Bardem) uses it to illustrate his motives. We get an ugly, in-depth look (and introduction) to our villain, and the scene is charged with sexual undertones that lend a real sense of unrest. Later Bond is forced to kill an ally, which he cannot do. It’s a deconstruction of the old interrogation cliche like Casino Royale‘s own bare-bones precedent.

That’s the thrust of the rebooted series I think, right? Or at least it’s what they started out with. Deconstruction, re-imagining, etc. Daniel Craig himself is on record saying that 007 had to be starkly different when they made Casino Royale because Austin Powers rendered the whole thing essentially a cartoon.

So why fall back into the old ways like Spectre has entirely? (The villain who wants world domination, the remote lair, the illogical action scenes, the disposable women…) Maybe they’re true-to-brand but they’re not true to the supposed new brand.

And that’s the point. The old brand is the true brand. And continuity doesn’t matter. Is it wholly important for character arcs and themes to carry over film-to-film? Nope. Because what is Bond, really?  It’s an ongoing product, an advertisement for other products, that gets re-imagined at face value every time a new actor steps in. Do you remember Bond movies for the plots? Maybe the better ones but on a whole probably not. But you do remember him as a mascot with characteristics you’re familiar with. Do you think it doesn’t matter that people get bent out of shape over a blonde Bond or potentially a black Bond?

The Bond machine likes to tell you that the “character is a reflection of the times.” You know, things like: the “threat of communism” is now the “threat of terrorism” as global opinions shift. And the role of women in film has gone from sex object to equal, etc. I don’t buy it, really, especially after this one. I think they pay lip service to feminism by including less Mad Men boys-club humor and “mirror the times” by making bad guys accountants instead of masterminds. The key though is that bones are all still there to fall back on when the filmmakers aren’t inspired to say something different.

And Spectre reinforces that. The villain was the ultimate mastermind, (the original mastermind in fact.) And the role of women here hasn’t changed much in 20 years. Women are still sorta dispatched so that the boys can fight, or mourning the deaths of their spy husbands, or living in the shadow of their dads, or sleeping with Bond because he crept into their chateau, or SURPRISE, they “know how to handle one of these,” etc. It’s token and not a step forward. Spectre is such stark departure from everything Skyfall got right, it’s kind of confounding.

It’s lazy writing. It’s the old mold of stringing set pieces and exotic locations together in a way that tricks the brain into thinking it’s watching a mystery. It’s pandering to a base audience and wrapping it in the pretty bow of auteur film making.

It’s style over substance. It’s outdated, and a step back.